Fall 2017 — Ask Richelle Castro or Justin Vazquez-Ellis what they hope to accomplish in their careers and you’re sure to be met with an enthusiastic answer: a description of research and dental school, or an entrepreneurial vision. While their dreams are different, their work ethic, ambition and love for community involvement is the same, which is why Richelle and Justin were chosen as the 2017-18 Terriere Scholarship recipients.

The Terriere Scholarship, which is funded by Leon and Doris Terriere and offered through the Disability Access Services (DAS) office, provides tuition assistance to students with visual and/or hearing disabilities. Recipients of the award are those who embody both academic achievement and dedicated involvement in the campus community. Each year, DAS offers the award to two exceptional students.

Senior Richelle Castro hasn’t always been sure of her career path, but she’s always loved two things — science and helping others. After transferring to OSU from Portland Community College her sophomore year, Richelle declared as a biochemistry/biophysics major. Her goal: to research and work on partial hearing regeneration, an idea that stemmed from her own hearing impairment. 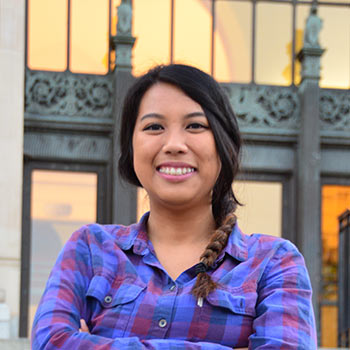 She participated in undergraduate research projects and joined the Biochemistry Club, where she discovered a welcoming community. “Some people say you shouldn’t study with your friends, but that hasn’t been my experience,” she says. “Biochemistry is a tough major, and we’re all in it together. We push each other, but not in an overly competitive way, and we all help each other with studying and stress.”

As she progressed in her major, her newfound community helped Richelle discover a new career passion: dentistry. Her friends and professors played an important role in her decision to change focus. “People will help point you in the right direction here, and give you guidance along the way,” she said. “My college experience has been learning from different people from different backgrounds, gaining from them a broader understanding of what’s out there.”

Currently, Richelle is working on a research project about fungicide resistance and serving as vice president of the Biochemistry Club, where she’s specifically interested in advocating for women, minorities and people with disabilities in the STEM fields.

Justin Vazquez-Ellis knows that achieving goals requires networking and communication. The sophomore business major hopes to collaborate with engineering and computer science students to start an environmental technology company in the same vein as Tesla.

For Justin, finding this type of community on campus has been all about boldness. “Sometimes people don’t know how to interact with people who are hard of hearing, and it can make socializing in a group setting tough,” he says. “But I just put myself out there and people are generally really friendly and supportive.”

And in his short time at OSU, he’s done a lot of putting himself out there. He’s involved with CRU and InterVarsity campus ministries, as well as Judo Club and wrestling classes. A person of many interests, he’s also working on becoming trilingual: he knows conversational Spanish and is currently learning German.

Justin is confident about his chances of finding partners for his business plan, in large part because of the OSU community. “It’s a lively, vibrant campus. There are people with diverse beliefs, backgrounds and interests, but everyone gets along and supports each other,” he says. He hopes that, with the community and resources provided by OSU, he’ll be able to launch his future company and improve the world’s alternative energy sources.

The Terriere Scholarship is awarded on a yearly basis to students enrolled in a program leading to a degree of licensure in their chosen field. Recipients must maintain at least a 2.50 GPA to keep their award.